Calgary Foundation / About Us / Our Stories / Wildlife Conservation Society Canada 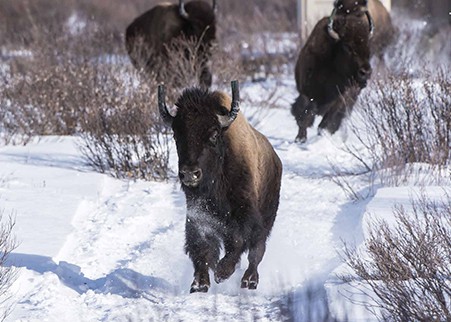 ALBERTANS OF A CERTAIN AGE may remember a time when a herd of bison lived in a paddock near the old airstrip in Banff. The paddock offered a rare chance to see the animals that used to roam wild through the area, but the herd was moved to Elk Island National Park in 1997 after studies showed it disrupted wildlife flow.

Since then, the Eleanor Luxton Historical Foundation, a wholly owned entity of the Calgary Foundation, has been working to bring bison back to Banff, a goal that was finally realized this past February. That group of bison from the airstrip paddock descended from a herd initially brought to Banff in the early 1900s by Norman Luxton, who helped to build the world’s largest herd of disease-free plains bison.

Since the Banff herd was relocated to Elk Island, Luxton Foundation board member and conservationist Harvey Locke and other ecologists have been working to bring them back—though, this time, as free-roaming wildlife. “Bison belong in Banff National Park,” Locke says. “It’s the only native wild species that isn’t there in our oldest and most famous national park.” The Luxton Foundation helped initiate and support the Bison Belong program, and as a result, a group 16 bison from the Elk Island herd are now in a fenced-in grassland area in Banff National Park. As the animals bond with the land, the fenced-in area will be expanded and eventually the fences will be taken down altogether.

The initiative is included in the Buffalo Treaty and has the support of Indigenous leaders. Locke says the project has strengthened bonds with Treaty 7 Indigenous communities. “One of the great challenges that people face when they want to engage in reconciliation with First Nations is to find something to do together that’s positive, and that’s really been key to this,” he says. “I’ve done a lot of environmental work in my time and I’ve never done anything that’s had this kind of impact across society—and widespread support. We have a real chance to right a wrong.”