Calgary Foundation / About Us / Our Stories / Bridging the Cultural Gap 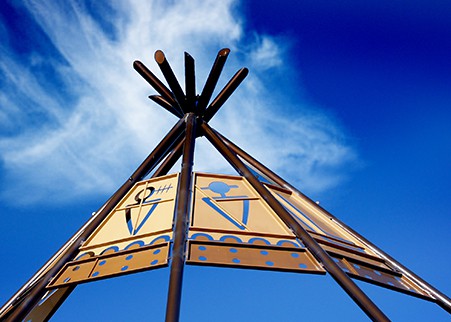 The power of strengthening ties with Indigenous communities

OVER THE 150 YEARS since Confederation, Canada’s relationship with its Indigenous people has evolved. Today, there’s a strong movement of Indigenous and non-Indigenous Canadians coming together as partners in healing our communities. The initiative below is an example of the Calgary Foundation’s commitment to building stronger relationships between all Canadians to bring about reconciliation and inclusivity.

FOR JEFF HORVATH, principal of the Tsuu T’ina Nation High School and a member of the Ojibways of Onegaming First Nation in northwestern Ontario, the idea of truth and reconciliation is about healing. Horvath’s mother is a survivor of Canada’s residential school system, and the trauma of her experience affected her children. Horvath has since dedicated his life to educating Indigenous youth, and last October shared his story as a keynote speaker at the Truth and Reconciliation Summit at the Banff Centre for Arts and Creativity. “Too often there are misconceptions and myths that are perpetuated in Canadian society, causing a pretty substantial rift between our communities,” Horvath says. “I think these rifts can be overcome if everyone knows the true stories and the actual events that happened to our families.” Horvath’s role in the conference, which received support from the Calgary Foundation, was to provide truth, but both he and organizers were also careful to focus on reconciliation, including the 94 calls to action laid out by the Canadian Truth and Reconciliation Commission. Horvath was one of several speakers who, along with members of the Bow Valley community, discussed what they could do to heal the rifts. “How do we engage with our Indigenous communities and make them full partners? How do we make sure that our services, our education and our hospitals are all serving their needs just as much as the rest of the population?” says Brian Caillou, the Director of Indigenous Leadership Programming at Banff Centre. “We wanted people to leave having learned a bit more about the truth and feeling inspired to do something in their communities.” To help organizations continue on the same path, the Banff Centre will release a report on the actions stemming from the conference to advance the progress of reconciliation.