Calgary Foundation / About Us / Our Stories / Students Making a Difference 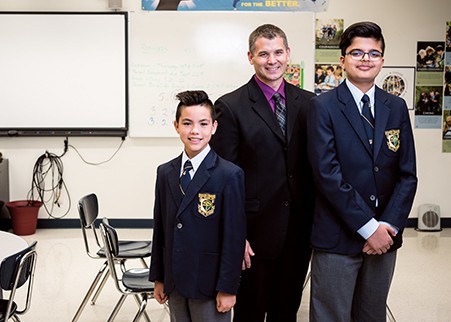 The Primary Years Project Exhibition has long been a feature of the grade six curriculum at Strathcona-Tweedsmuir. Each year, as part of the PYP Exhibition, students are divided into groups and asked to deliver a presentation on a given topic. During the 2015-2016 school year, “vulnerable populations” was chosen as the PYP Exhibition theme—and that’s when the project took an interesting turn from grade six assignment to something much more meaningful for the school and the community.

One of the students, Aydin Bhojani, realized his father, Ali, a Board-member of the Calgary Foundation since 2009, might have some guidance to give him about vulnerable groups in the city. The father and son discussion ultimately led to a bigger plan for the PYP Exhibition—one that would see Foundation volunteers and staff serving as judges on presentation day, and the students focusing their speeches on a charity of their choice, explaining how that particular charity worked with vulnerable people, and why it merited support from the Calgary Foundation. With the plan in place, the students went about researching the charities they wanted to talk about. Sixteen different organizations were chosen, including Legacy Place Society, the Pathways Community Services Association, the Calgary Bridge Foundation for Youth, Autism Calgary, Accessible Housing and the Kerby Centre.

At the Foundation’s suggestion, the students also conducted site visits to the charities they researched, bringing them face-to-face with vulnerable populations. “It was completely different than something they might learn from a book or a YouTube video,” says Wick, who has been teaching for 18 years. “This was the most authentic learning experience I’ve ever seen provided to students. Everyone was positively impacted—the students, the mentors, the families of the students. We even had a few families volunteer at the organization their child had visited and researched.” The Calgary Foundation, wanting to acknowledge the time the charities had so willingly given to the students, and to give the students an experience of philanthropy, granted $5,000 each to the three charities whose groups were selected as the top three of the competition, and smaller grants to the charities that were

runners up. The initial program was such a success that the school ran it a second time in the 2016-17 school year, and plans are underway to keep it moving forward in this next school year. The Calgary Foundation plans to expand the program, too, in order to work with other schools throughout the city in the future. “It would be great if this could expand to other schools in Calgary,” says Aydin Bhojani, who is now just beginning grade eight at Strathcona-Tweedsmuir. “When you’re young, you don’t think you can make much of a difference. It was empowering to learn otherwise. All my classmates felt the same way.”