Calgary Foundation / About Us / Our Stories / Investing in the Future

Investing in the Future 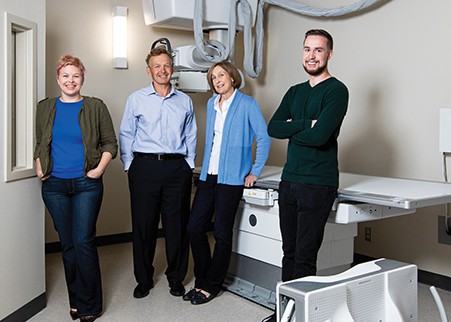 WHEN MATT AND PEGGY AUFRICHT got involved with philanthropy, they knew they wanted not just to give, but to invest by leveraging their donations in a way that would have lasting impact. The Aufrichts felt that the best way to help strengthen the community would be to focus on individuals who had the potential to become community leaders but were held back by financial need. With that in mind, in 2007, they set up the Aufricht Family Scholarship at the Calgary Foundation. The scholarship is an award of $3,000 to $5,000 given each year to four to six students entering the University of Calgary or SAIT Polytechnic. If the students maintain a good academic record, the scholarship is renewed for the remaining years of their undergraduate degree. “It’s an overused phrase, but we like to pay it forward,” Matt says. “If we can help these students now, then 30 years from now they’ll be able to help others the way that we’ve helped them.”

Every year, the Aufrichts get together with the Calgary Foundation to select students that demonstrate the right combination of academic talent, community involvement and financial need. “A lot of these families work really hard, and if they have the ability to access education and get a good job, their whole family benefits,” Peggy says. “If you can make it easier for those kids to get to university, you know that later they’re going to give back.” For the last three years, the Aufrichts’ daughter, Lindsey Israel, has been part of the selection committee for the scholarship. “It’s an honour to participate in the process,” Israel says. “To me, the ultimate goal is for these kids not to feel alone in the world, and to help make the next stage of their lives a little less stressful.”

Recipient Nick Riopel is a U of C student in the final year of a degree in biological sciences who hopes to enter medical school next year. He says that the money that he’s received has allowed him to go through school without having to work constantly to pay tuition. “The scholarship has given me more time to work on the things that will strengthen my applications and help me get into medical school,” he says. “I’ve been able to become more involved in the community. I volunteer at a hospice and a homeless shelter on a regular basis. I’ve been able to put a lot more hours into those places and work toward my career goal.” That’s exactly what the Aufrichts intended when they set up the scholarship: giving talented young people a better chance to fully explore the opportunities ahead of them. And with 49 students receiving the scholarship over the last decade, and virtually all experiencing success, there’s little doubt that the program is working.