Back to Jane’s Walk Leader interviews 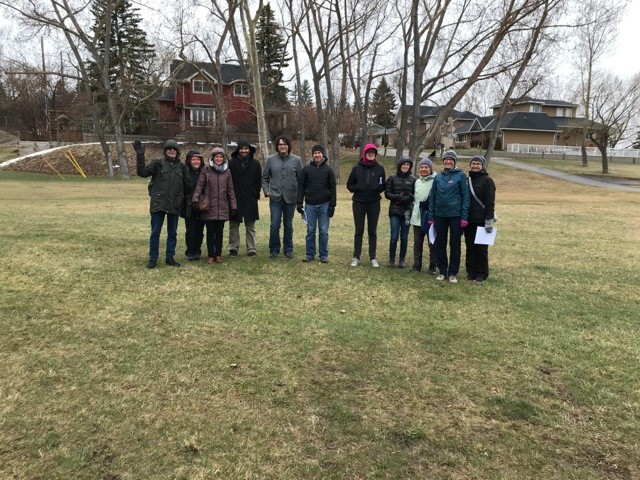 Please give a brief overview of the Jane’s Walk you led.

I’ve lead Jane’s Walk for the past few years, which is a walk from our Community Hall in Glendale, along the southside back lane, across 45th Street SW into Glendale Park and through to the start of Optimist Park. There isn’t a pathway; we walk through the center of the park.  I talk a bit about the history and background on the origins of this area, comparing it to what you see today.  We then talk about Glendale/Glendale Meadows from its earliest days— I occasionally get a senior that still lives here since the 1950s, a relative or longstanding resident that have seen changes to add their thoughts.

What motivated you to lead a Jane’s Walk?
Glendale/Glendale Meadows is a very beautiful community, a hidden treasure of middle-class homes and mainly RC1 properties.  So, there are lots of trees, big green yards, a decent amount of biodiversity, and curvy roads—the first in Calgary to introduce that feature.  This is also an area that was the beginning of modern property development.  Before this, the City would handle everything.  Now was the time that developers would handle, everything. In the midst of the community was a lake—Glendale Lake. It was deep enough that it wasn’t totally season—I don’t think it dried out completely.  However, in the early 50s it was drained and the dreams of making this Calgary’s first lakeside community were dashed. It put our community hall in a ‘valley’ that is very private, well treed. Overall,  more park than parking lot appearance of other community associations. Both the beauty of this green heart that goes east/west through our community and the interesting history of how a 50/60s community turned into a modern one is amazing. It’s also a story I want to talk about as the pressure for densification in a middle-class income area due to our nearness to an LRT station, needs an affirmation that what is here is worth keeping, and that densification should be an evolution, not an imposition.

Do you have any special memories from the walk you led?
Last year, I mentioned Jane’s Walk to my German conversation instructor.  By coincidence, her parents are from Germany (near Berlin) and were coming to visit her during this time.  So, I invited them to join in. What an interesting conversation with all of the group regarding how Germany operates vs Calgary.  They were gob smacked by the differences. As were we. There was also a thought to hold a Jane’s Walk by these visitors in their neighborhood in Germany.

How do you build community during the pandemic?

Building community is a challenge during these times, but we’re working at keeping the community informed and having some appropriate events.  Our park space is a good magnet for walking and getting some fresh air. Our roadways are quiet and curvy, with lots of treed properties. The Easter Bunny was driven around the community (pretty much every street!) and we asked children and parents to come out and wave and make noise, dressed in their Easter finery!  We’re looking forward to doing something for Neighbor Day—using a steel fence to hang positive messages painted on a piece of wood; anyone can join in.  We do Zoom board meetings and are getting the hang of inviting people to join in.  But, what is NICE, is that people when they are outside, say hi!  and wave!  Before, walkers would just not look at anyone and motor on.  It’s a much more friendly environment. People check up on each other.  We have volunteers who will help others.