Back to Jane’s Walk Leader interviews

Erlton: More than Just an LRT Stop with Susan Tyrrell 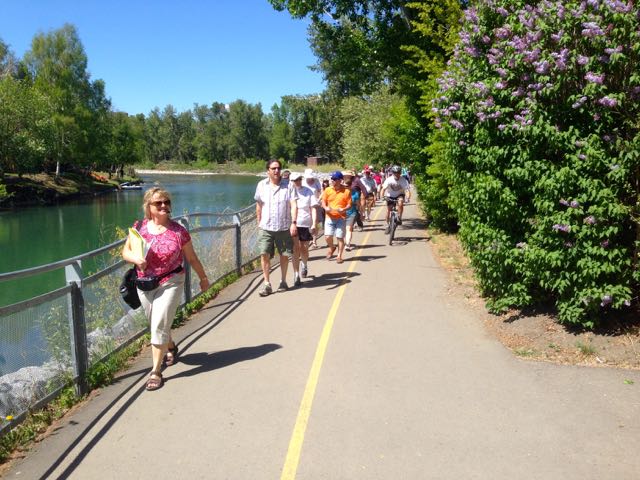 Please give a brief overview of the Jane’s Walk you led.

Nestled between the Elbow River to the West, Lindsay Park to the North, Macleod Trail to the East, and Mission Road to the South, Erlton is an often-overlooked inner city oasis. Over 100 years old, this community is home to the lovely Lindsay Park, the bustling Repsol Sport Centre, a huge hill, a convent, cemeteries, Forrest Park, present and future condo developments, and hundreds of feral domesticated bunnies. And resilient Calgarians who were caught in the epicentre of the 2013 flood.

What motivated you to lead a Jane’s Walk?

When I was on staff at the Calgary Foundation, I learned about Jane’s Walk, and had the pleasure of participating in many of them throughout the city. A friend of mine led a walk in her neighbourhood of Ramsay, and this inspired me to create a walk for my own neighbourhood, Erlton. Although it’s a smaller and less well-known community, it also has a rich history of more than a century. The community has faced many challenges: the construction of the Canadian Northern Railway in 1911 which ran right through it, terminating in Lindsay Park: the expansion of Macleod trail in 1967; the most expensive fire in Calgary’s history in 2002, and of course, several floods, including the one in 2013. Established as “Parkview” in 1906 by Dr. Neville Lindsay, it was intended to be an upscale neighbourhood, but it became the home of working-class people, employed by the railway and other nearby industrial sites. Since the 1980’s and the conversion of the old CNR railway yard back into Lindsay Park, Erlton has become gentrified, with modest single-family homes being replaced by condos, townhouses and infills. It provides a good case study of the continuing evolution of a neighbourhood, very fitting for a walk inspired by Jane Jacobs.

Do you have any special memories from the walk you led?

The Repsol Sport Centre embraced my idea of a walk with their facility as the starting point. It proved to be a very enthusiastic and generous partner. The senior staff not only provided welcoming remarks, but bottled water and a complimentary day passes!

How do you build community during the pandemic?

Keeping in touch, whether it is through technology, hosting virtual meetings, or pop-up conversations and possibly other events such as impromptu concerts, practicing physical distancing, of course. Planning for a community gathering, once this is over.