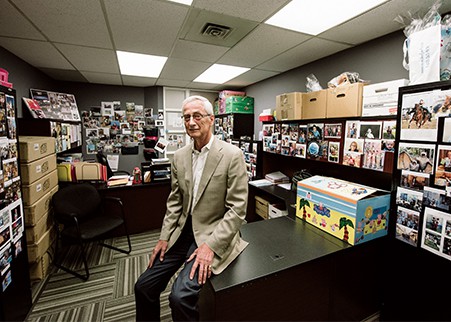 Through the creation of a Future Fund with the Calgary Foundation today, Frank Hall knows he will have a positive impact on tomorrow.

F RANK HALL is a quiet man, but his dedication to the Children’s Wish Foundation speaks volumes about his character. He first became involved with the Canadian charity—which grants wishes to sick children and their families—through his late wife, Terri.

They started volunteering with the organization in the early 1980s, with Terri going on to hold senior roles there. “It meant a lot to her to help other people, particularly youth, in their time of need,” says Hall, who is the founder of Hall’s Auction Services Ltd., a full-service auction company in Calgary.

I’m a simple guy who’s happy to help. I just wanted to do something in memory of a wonderful person. When Terri passed away from cancer in 2005, Hall decided to continue volunteering with the Children’s Wish Foundation, and create a Future Fund through the Calgary Foundation.

Through this Fund, Hall is bestowing part of his estate to the Children’s Wish Foundation upon his passing.

“I thought it would be nice to honour [Terri] for all of the work she did for the kids,” he says. “Setting up the endowment fund is a natural choice for making sure she’s never forgotten.”

The magic of seeing a sick child experience a dream come true motivates Hall to continue his support of the Children’s Wish Foundation. He has worked behind the scenes on many wishes, but one of his most memorable experiences took place more than 20 years ago when he helped arrange a trip to London, England, for a 12-year-old girl who wanted to see the Royal Ballet. Much to the delight of the girl and her family, they got to enjoy the ballet sitting just two rows behind the late Princess Diana. Hall is content knowing his Future Fund will continue to make dreams come true for many more children—all in honour of Terri.