Calgary Foundation / Donor Stories / Giving Into the Next Generation 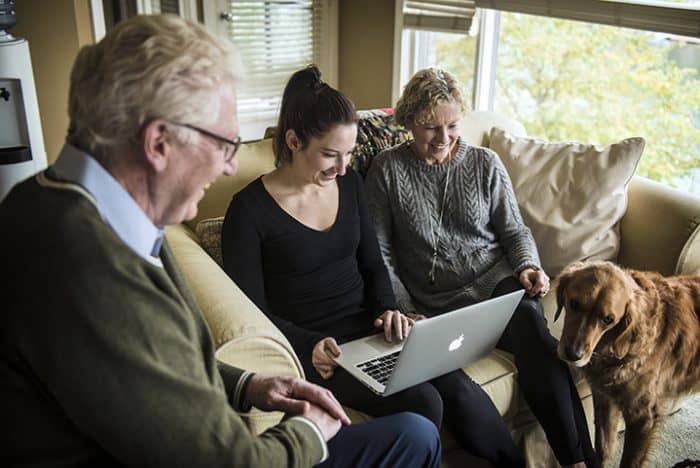 Every family has their own traditions – perhaps it’s making a gingerbread house together or playing board games on a Sunday night. The Gibson family embraces similar rituals, but they started a new tradition five years ago that will contribute to their community for generations to come.

They gather once a year at Thanksgiving to discuss which charities they will donate money to out of a family endowment fund they opened through Calgary Foundation.

Bob Gibson, current chair of the board of Calgary Foundation, opted to open the Gibson Family Fund after retiring in 2013. Along with his wife, Laurie, and their daughters, Nicole and Meghan, the family puts their minds together annually to decide which charitable organizations will receive grant money.

“A lot of people only think about what they can do philanthropy- wise when they die,” says Bob. “An endowment fund isn’t only for the next generation. It is structured so we as a family decide where the money goes now and our daughters and their families will continue supporting community into the future.”

The Gibson Family Fund began with a lump sum of money given to Calgary Foundation with a percentage of that amount donated to various charities every year. The original investment amount has continued to regenerate and grow due to the impressive investing returns of the foundation’s endowment.

Since setting up the fund five years ago, the Gibson Family Fund has already granted one fifth of the original amount, with the money in the fund now greater than what they donated. “Essentially, that money lasts in perpetuity – assuming continued investment success,” Bob continues. “That is the power of an endowment.”

When Bob first suggested the endowment, Laurie said, “Absolutely, let’s do this; this is exciting,” but admits to not really understanding what was involved. However, after meeting with the foundation donor engagement team and having them walk her through the process and offer resources, it’s been an “incredible experience.”

The endowment fund also allows the Gibsons to reflect on the needs of the community as well as their own diverse passions. From animal welfare to student legal services to education, they have each been able to find the best charities for their interests through the help of Calgary Foundation.

“It’s good to be involved now and see what needs there are,” says Nicole, who has become the resident expert of the online resources. “Because down the road I’ll know what to do and be able carry it on.” Laurie was a teacher, and opted to focus on educational causes. One of her first donations was to Friends of Fish Creek Provincial Park Society, which helps bring students from disadvantaged schools on field trips.

“The joy these children have in getting out of the classroom and seeing things they would never have the opportunity to see is really rewarding,” says Laurie. “It’s been so meaningful to have the input now, see where the money is going, and see the impact it’s having.”

In addition to having expert investment managers monitoring Calgary Foundation’s assets, as one of the 1,200-plus fund holders, Bob says there are countless resources available to help donors choose the most impactful organizations.

“Calgary Foundation’s knowledge of community needs sets it apart. Their 10-year investment returns, and expertise in grant making, make it a compelling partner for anyone looking to establish an endowment legacy,” says Bob. “They really put our money to work.”