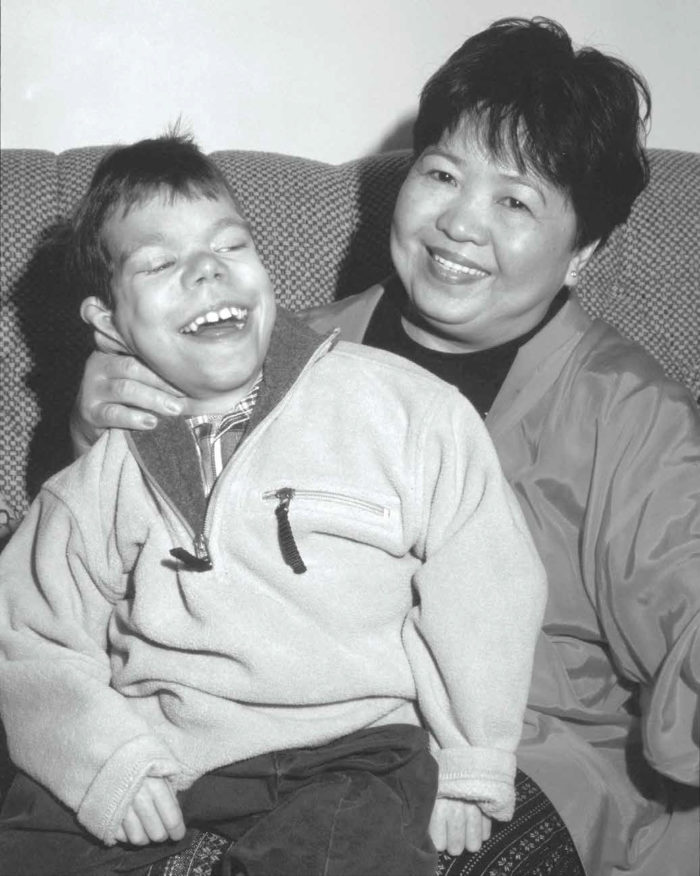 When their firstborn, Fraser, came into the world in 1985, Anne and Steve Lockwood soon realized they would need help to give him an acceptable quality of life at home. Fraser was born with a  rare syndrome and had many developmental challenges. He never walked or talked, but Anne says he was always happy.

“He responded to the people who cared for him and loved him. He had a really bright and cheerful smile and laughed often despite his many challenges.”

Fraser was perhaps the happiest when he saw Meli Manalo, his long-time caregiver who had moved to Canada from the Philippines. The Lockwoods give Manalo a tremendous amount of credit for Fraser’s ability to enjoy life, as she was by his side almost constantly for 20 years. Anne and Steve feel fortunate that Fraser lived as long as he did. He passed away in 2007 at the age of 22 with his parents and two younger sisters by his side.

As a way to express their gratitude to Manalo and honour the memory of their son, the Lockwoods worked with the Calgary Foundation to create the Fraser W. Lockwood Memorial Scholarship, which was first awarded in 2008.

This scholarship is presented annually to a student, preferably with ties to the Filipino community, entering his or her first year of post-secondary studies. The recipient receives a minimum of $2,500 for tuition, and the scholarship is renewable. It wasn’t the family’s first venture into philanthropy, as Anne’s father had also worked with The Calgary Foundation to create the Watson Family Fund, which supports families who have children with special needs.

Fraser W. Lockwood Scholarship recipient Jaymee Sison, 22, was awarded the scholarship for her nursing studies at the University of Calgary. She graduated in April.

“I’m so thankful — it took a big load off my shoulders,” says Sison, who was offered a job at Foothills Hospital right out of university. “I was able to focus on schooling.”

Sison was born in the Philippines. Her family moved to Canada in 2002, and her parents worked to regain their educational credentials in Canada. “Watching how my parents put themselves back through school was a huge motivation for me,” Sison says. The scholarship made it possible to balance school, work and volunteerism without going into debt.

This is exactly the right outcome,  says Anne Lockwood. “We’re really, really happy that we’re able to give back.”