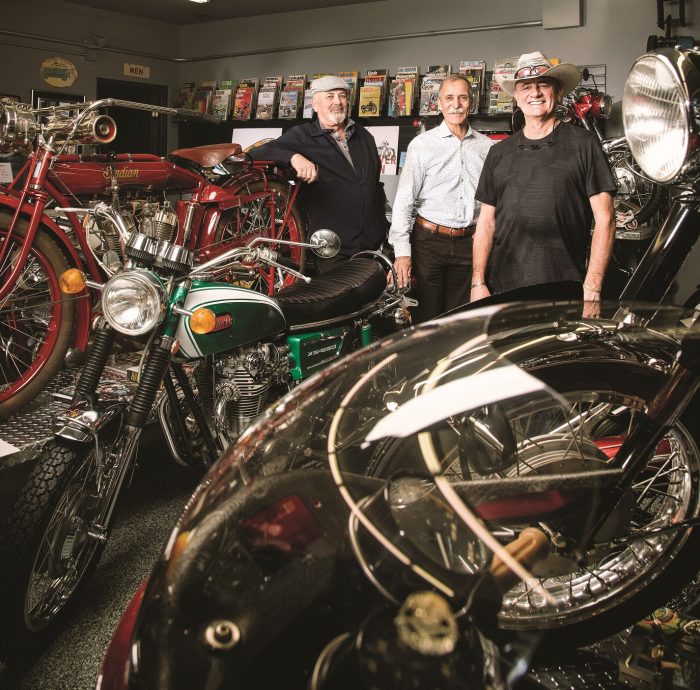 Sitting with Brian and Jim Sibthorpe in a Bowness building that’s part office space and part museum, it’s easy to see what the brothers hold most dear. Sure, the collection of vintage bicycles and motorcycles on display is testament to their family’s success in turning its former business, Bow Cycle, into an icon of two-wheeled retail—but it’s more than that.

It’s the lively conversations with the many people who filter in and out of the office, the stories about the feats and foibles of their father, Jim Sibthorpe Sr., and the tales of growing up in Bowness and working at the family business that make the brothers’ eyes light up.

Behind it all is a desire to give back to the community that gave their family so much since their father, a Second World War veteran, settled his family in Bowness. In 1957 he opened up a small shop selling bicycles and fishing gear and repairing lawn mowers. Brian and Jim Jr. eventually took the reins of the business, which grew into separate operations: Bow Cycle& Sport, specializing in bicycles, and Bow Cycle & Motor with motorcycles and ATVs. The brothers sold the company in 2002.

Acts of charity were a fundamental part of the Sibthorpes’ upbringing, Brian says. “Dad was a compassionate man and always considerate. He had charitable initiatives, even though he didn’t have a lot of time—he was busy trying not to go broke.” He donated to local sports teams and encouraged his sons to be of service, because even though they didn’t have a lot, not everyone was as fortunate as their family.

The Sibthorpe brothers’ desire to give back to the community that had supported them began to take shape through a customer who was a regular at their motorcycle shop. Dale Ens, a motorcycle aficionado and professional financial advisor, had developed a rapport with Jim Sibthorpe Jr. through long chats on the sales floor beginning in the early 1990s.

A few years ago, Jim called Dale after seeing his picture in a Calgary Foundation publication. Ens is a longtime Foundation volunteer. “He said ‘I wonder if you could spend a few minutes telling me what Calgary Foundation does. My brother and I are looking at expressing our parents’ legacy,’” Ens says.

Part of Ens’s work as a financial advisor is to introduce philanthropy and discuss the impact clients can create through giving. “Your individual charitable intentions are a reflection of your values and principles, not the values and principles of your advisor,” Ens says. “It’s not my story; it’s my clients’ story. It’s about what’s important to them: what is the cause, and why do they care?” And that’s what was discussed when the brothers and Ens sat down one Saturday morning at the Sibthorpes’ office, perusing their eye-popping two-wheeled collection while chatting about Calgary Foundation.

Their priorities were clear: “Those two guys are infatuated with their community. They don’t just like Bowness; they love Bowness,” Ens says.

After the conversation, Ens connected the brothers with Laily Pirbhai, the Foundation’s vice-president of donor engagement, to discuss the family’s legacy. “I didn’t bring the money to the door, I just brought the relationship to the door, and I think it worked out really well. I think they are really happy,” Ens says.

“We got the feeling this was probably the right spot for us,” Brian says. “And the fact that we could have input into the (grantmaking) direction of our charitable interests was really an appealing thing. I think my dad would have liked that too.”

The Jim and Mary Sibthorpe Family Fund focuses on community endeavours, especially in the neighbourhoods of Bowness and Montgomery. Organizations including the Bowmont Seniors Assistance Association, the Bowness Historical Society, the Bowness Community Association, Between Friends Camp Bonaventure, the Bowness Club (run by the Boys & Girls Club of Calgary) and the Calgary Cerebral Palsy Association’s Adapted Bike Program have benefited from the Fund.

Jim Sibthorpe Sr. was always trying something new, from buying property and expanding his business to taking on new brands and products, and the brothers would like to see the Fund grow similarly.

“Going forward, what we’d really like to see is our future generations feeling good about the whole deal. It’s our nature to grow things,” Brian says. “And thinking back to our mom and dad, we feel pretty fortunate. Our family going forward gets to be part of the meaning of all that work they put in,” he says.

“We feel (Calgary Foundation) is a good place for our money to go. They do a lot of good things for people who can really use the money.”