Calgary Foundation / Donor Stories / All in the Family 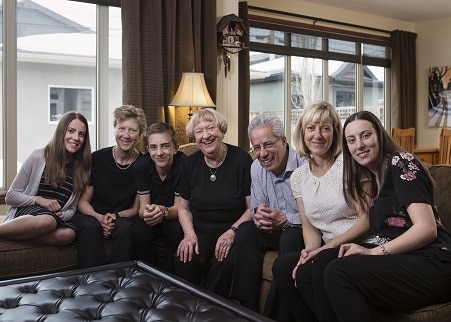 When Audrey Thorner decided to step up her annual giving a few years ago, the first place she turned was to her family.

“Family is my strongest value,” she says. “If I was going to do something, I couldn’t imagine doing it without them.”

Audrey set up the Thorner/Johnston/DiMarzo Family Fund in 2015 with the Calgary Foundation, and now, through that fund, Audrey’s children and grandchildren can champion causes near and dear to each of them.

“Lots of people are struggling out there, and, working as a social worker, I was highly aware of that,” says Audrey, now retired. While her own roots are humble – her father worked in a factory and her mother cleaned houses – Audrey remembers that anytime anyone came knocking to collect donations, her parents always responded positively. “I’ve donated throughout all my life,” she says, “and I grew up thinking you support your community.”

Audrey, 84, and six other family members — daughters Jennifer DiMarzo and Laurie Johnston, son-in-law Nick DiMarzo and her three grandchildren, Michael, 13, Nadia, 16, and Serana, 18 — each get an equal portion to give to causes they care about through the fund.

“Everyone in the family gets to make a decision,” says Jennifer, emphasizing how much it has taught her children. “This makes them realize they have more impact. It gives them more decision-making power, and their volunteer experiences have influenced some of their decisions.”

Both passionate about animal welfare, Michael and Laurie have supported everything from hippo conservation in Africa through the Calgary Zoo to the Alberta Animal Rescue Crew Society and Veterinarians Without Borders. Nick volunteers as treasurer for the Calgary Girls Choir, so he naturally chose to channel his contributions there. For Nadia and Serana, they wanted to empower children in developing countries through the social enterprise Me to We. And Jennifer and Audrey, who are keen to assist Canadian newcomers, ended up establishing a student award through Education Matters to help new Canadians in high school pursue post-secondary studies.

All of these efforts have made Audrey deeply proud of her family. “Not everyone [can be] a big donor,” she says. “But it’s a lot of small donors that make a big difference.”

Each year, the fund grows and every family member has the option of contributing to it further.
Jennifer says her family is now empowered to make a greater impact. “Without [the fund], I may not have had the same financial resources to give like this. By getting everyone involved, especially young kids, you’re also instilling this idea for a lifetime of giving back and supporting people who need a hand.”

“Plus,” adds Laurie, “it’s a fun thing we get to do together each year.”