Building a more Harmonious Community Through the Power of Music 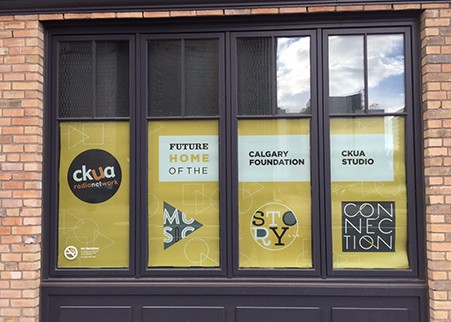 Calgary’s East Village has been transformed into one of Calgary’s most vibrant communities, and the centrepiece of the area’s renaissance is the National Music Centre.

The architecturally stunning, street-spanning building incorporates the historic King Edward Hotel — home of the blues in Calgary for decades.

The National Music Centre, or NMC, also contains a street-level broadcast studio for CKUA, Alberta’s public radio station and Canada’s oldest public broadcaster, which had been without a permanent Calgary studio for several years.

Broadcasting province-wide, CKUA has 60,000 daily listeners in Calgary alone. The station celebrates eclectic music and the cultural connections it makes, from blues, roots and indie music by Alberta artists, to a wide range of global sounds.

Its Calgary base in the NMC’s Studio Bell and the partnership with Calgary Foundation are a great fit, says NMC president and CEO Andrew Mosker.

“For NMC this is a perfect partnership,” Mosker says. “Our building’s exhibitions and broadcast studio can share stories about music in Canada, including CKUA’s unique, ongoing story.”

David Ward has been involved with CKUA since 1982 and works as an on-air personality as well as the station’s “point person” in Calgary.

Ward broadcast from the NMC for its grand opening in 2016 and says the ability to interact with visitors was energizing. “We were bringing all this magic and excitement — there were 5,000 people there, which was fantastic,” Ward says.

It’s this kind of engagement that inspired Calgary Foundation to throw its full support behind the NMC and CKUA, says Foundation CEO Eva Friesen. “The National Music Centre is more than a hub for music lovers. It’s a virtual gathering place for the community to share and engage with one another and strengthen ties.”

Mosker looks at CKUA’s presence in the building as a living artifact of sorts, but also as a way to connect people and build a stronger community. “There’s an incredible symbiosis

between CKUA listeners and the National Music Centre audience,” he says. “We’re excited about introducing them to each other.”